In part 11 of the series, we discussed our interior barndominium framing. After framing comes barndominium rough in work: HVAC, plumbing, and electrical. These tasks were exciting and overwhelming. All of the trades can, and for us, did work in the home all at the same time, which meant we were making tons of decisions every day regarding all kinds of things in the home.

At the same time, this work also felt grueling. This was mainly because most of the work will go inside the walls, so we didn’t see major changes from week to week. We also had a few delays, which makes us extra excited for the next stage of construction coming up soon!

Or start from the beginning by going straight to part one of the DIY barndominium series.

Of all the rough in work at this stage, heating and air has definitely been the most massive project. Our systems were unique because of several unique features in our home.

One of the unique features of our home is the tall ceilings and open concept. We also have an open lofted second floor which is more open space. This can be a challenge when considering HVAC. From a design standpoint, we knew that we wanted exposed ductwork, so we planned to have the black spiral duct in the kitchen and living room areas. We had to place the spiral duct strategically so that the heat could distribute throughout the room well and still be visually appealing. We decided on 12ft high. We also built out a soffit in order to bring the HVAC through the other rooms on the main floor.

Upstairs, we decided to add mini-split systems in order to adequately cool and heat the second level rooms. Mini split systems are nice because they have their own thermostats which can be set independently, and using them alleviates pressure from the main unit. This helps with efficiency and long term effectiveness and maintenance.

During the plumbing phase of our rough in, our bath tubs and shower pans were placed, and water lines and pipes were run. We had outdoor spigots placed as well.

The most challenging portion of this stage was adequately supporting the framing whenever pipes have to be run through existing framing. For example, our upstairs bathroom is placed directly over our master bath and guest bath. When designing, we thought this would be helpful and cost effective. Instead, it caused some issues with all of the pipes needing to run very near each other. Luckily, we had a very crafty framer, who was able to come in and add supports where needed.

For electrical, we went with traditional can lights throughout our main and secondary floors. We were able to place lantern lights on three sides of our home, and other specialty lights throughout the house. I can’t wait to be able to flip those switches! Additionally, electrical outlets were placed.

Other Tasks for This Stage

Along side our rough in work, we were also able to run our electric underground, install an ERV system, and pass multiple inspections through our county. Of all the stages of construction, this one has probably been the most grueling as a homeowner. There were long stretches of time where things were happening at the build, but it didn’t really seem like it since all of what was placed will, mostly, be hidden behind walls.

We also had some weather and inspection delays. Overall, we are incredibly thankful that we were able to work with amazing contractors who take pride in their work. We are also thankful that the next stage is coming!

During the next stage of construction, we look forward to spray foam and drywall. We are excited for our interior to feel much more homey and comfortable with these additions. After drywall, all of our interior finishes will begin, which I am sure will be a whirlwind. I can’t wait to show it off! 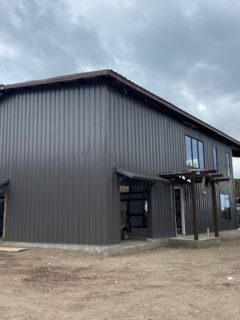 Next
Oklahoma Barndominium with Large Shop and Above-Ground Pool