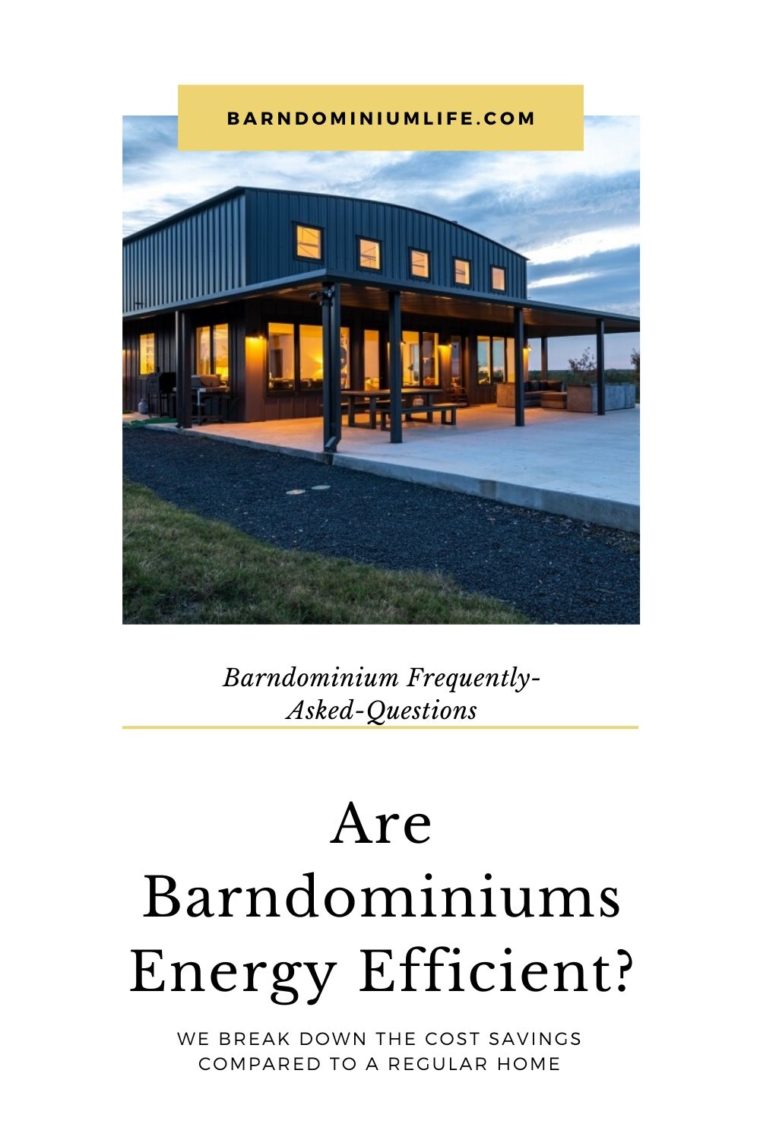 It can help first to make sure you understand exactly what barndominiums are, too. Barndominiums, in brief, are often steel and metal structures that have been transformed into residences. Many times they will feature a large shop or garage area for woodworking, pre-fab, and other activities.

The term “barndominium” combines “condominium” and “barn” successfully. People used to say the word any time they were talking about barns that were newly made into homes. More and more, barndominiums are new-build homes with some fairly high end, energy efficient features. Some examples are windows that are energy efficient, sophisticated plumbing systems and even foam insulation.

People these days are more drawn to energy efficient residential properties than ever before, and for good reasons.

Spaces that are energy efficient also tend to feel a lot better. They may have superior air circulation, moisture levels and temperatures overall. If you want your home to feel airy and welcoming regardless of the season, a barndominium may be ideal for you.

Spaces that are energy efficient naturally have more resale value and are highly sought after. People naturally gravitate to structures that can help them decrease their utility costs significantly.

It isn’t uncommon to come across barndominiums that have been sprayed using a foam insulation. The goal behind this spraying is to offer in-depth thermal protection. People apply this sort of insulation in single and even layers. This insulation variety isn’t vulnerable to the release of heat. That’s how it differs greatly from fiberglass insulation.

Barndominiums tend to feature windows that are energy efficient. Windows that are part of this category can be an asset for many reasons. These windows are capable of decreasing the costs of energy. That’s because they can do away with all concerns that involve the leaking of air. They can do away with concerns that involve air from outdoors making its way inside as well. These are issues that many people experience in the winter and summer seasons alike.

That’s due to the fact that it can contribute to indoor spaces that seem markedly colder. If you don’t want to have to deal with having to pay for additional heating, then a barndominium that has energy efficient windows may be right up your alley.

There are a couple of other major perks that are associated with barndominiums and their energy efficient windows. They can protect interior spaces, furnishings and art pieces from destruction that’s brought on by the sun’s aggressive ultraviolet rays. If you don’t want your living room upholstery to fade, life in a barndominium may be calling your name.

The Ins and Outs of Metal Barndominiums

Barndominiums are often made using metal. Metal is a material that’s known to deliver enhanced resilience and power. Since it’s so hard-wearing, it can dramatically decrease energy needs and upkeep expenses with the passing of time.

If you want to go for a barndominium that’s particularly energy efficient, both metal and wood are rather decent options. Remember, too, that it isn’t at all uncommon to come across wood barndominiums. We wrote a comparison about metal vs wood barndominiums, both are good options. That said, some folks believe that if it’s not metal, it’s not a barndo. Here are BarndominiumLife.com, we try to stay away from religious topics (yes, barndos are a religion!).

If you’re seriously contemplating whether to move into a barndominium or a straightforward home, learning about energy efficiency may be helpful. Since barndominiums are usually significantly more energy efficient than their traditional home counterparts are, opting for them often feels like a no-brainer.

There are so many things that can take energy efficient barndominiums up a notch or two. Metal partitions enable people to set up higher numbers of rooms. Metal partition installation can close off living sections effectively.

Believe it or not, the construction of partitions in your home can have a drastic impact on energy efficiency. The more walls, the more heat or air is kept within the room itself, rather than leaking to somewhere else.

Other Strong Reasons to Turn to Barndominiums

People all around the United States and Canada are starting to realize just how promising and exciting barndominiums are. That’s why it’s no shocker that many people are picking them over standard homes.

Since they tend to be significantly more energy efficient than their standard counterparts are, they can draw in people who are trying to minimize costs. Energy efficiency is just one of the many diverse perks these structures can bring to the table, however.

Barndominiums or simply “barndos” are in many cases made using sturdy materials. Metal ones can hold their own against harsh environmental factors. They tend to be a lot tougher than homes that are made using classic construction materials. If you want to invest in a living space that has longevity, then the barndominium path may be optimal for you and for the other people who are part of your household.

Although these structures have basic and straightforward appearances, they still manage to be inviting visually. If you want to reside in a home that’s simultaneously energy efficient and has curb appeal, then a barndo may be the answer.

Barndominiums are energy efficient and therefore can be a boon for people who want to save substantial sums of money. They can help people save big in a couple of other ways, too. These structures tend to have insurance and tax rates that are nowhere near as costly.

There are so many options in barndominiums nowadays. People can construct them out of nothing. They can revamp older barns as well. If you want to revel in a daily lifestyle that’s the pinnacle of comfort and convenience, then you should learn everything you can about barndominiums.

BarndominiumLife.com is a participant in the Amazon Services LLC Associates Program, an affiliate advertising program designed to provide a means for sites to earn advertising fees by advertising and linking to Amazon.

Find awesome listings near you!