Why a Barndominium Ban is a Bad Idea

Recently, the city of Arnold, Missouri passed a ban on metal pole buildings within their city limits. According to the city council, this barndominium ban has to do with the aesthetics of the town as well as the council’s concern for the structural safety of barndominiums. At Barndominium Life, we think a barndominium ban is a bad idea, especially if it is based on the misconception that these beautiful custom homes are unsafe.

In this article, we have laid out several reasons why a barndominium ban is a bad idea and why they should be allowed to be built in compliance with local zoning laws. By fully understanding the safety and unique style of these homes, you will see why they are an excellent addition to any community.

Why is a Ban Being Considered?

According to the Arnold, Missouri city council, the ban was enacted after a six month moratorium was placed on the structures in September of 2020. This decision was made due to the fact that barndominiums are so different from the other homes within the city limits. The council believed that they were not consistent with the look of the other homes and buildings in the area and that they broke up the cohesive feel of the rest of the town.

They also cited that they felt the homes would not be up to code with the city’s current zoning laws if there were any new ones that were to be built. This is because there were recently new rules applied to the building codes saying that new home construction could not have metal as a siding material. This presents an issue with metal pole barns which are all steel siding.

While these particular rules are specific to Arnold, Missouri, we think that they should not spread to other parts of the country. Barndominiums offer so much to the communities and people who live in the areas where they are built. Below, we have laid out some of the reasons a barndominium ban is a bad idea.

One of the biggest advantages of building a barndominium is the fact that they are so durable. The all-metal construction protects them from things like rot and mold, which can not only affect the home itself, but also the other homes surrounding them. A barndominium ban could mean that neighborhoods are more susceptible to mold issues and structural problems that can cause problems to other homes.

Barndominiums are also incredibly useful to have around in places where floods and inclimate weather is a regular occurrence. Their durability means they are much more likely to survive high winds and storms, which makes them great structures to have around in the event of one of these emergencies. Their durability and strength is a wonderful feature and a barndominium ban could deprive communities of a safe structure during a wind event.

One of the reasons a barndominium ban was being considered in the first place is the fact that they don’t fit in with other houses. However, we think that’s a major advantage. Barndominiums add something different to a neighborhood and a community and they can be incredibly beautiful and interesting looking if they are properly designed and constructed.

While barndominiums are incredibly unique, they can also be built to look like any other home. There are many barndos throughout the country that look just like regular homes on the outside with the exception of their metal siding. In fact, there are many barndominiums that use other types of siding as well. A barndominium ban based on aesthetic purposes could do more harm than good when it comes to the look and feel of a neighborhood.

In a time when affordable housing is getting harder and harder to come by, a barndominium ban is the wrong move. Many people who wish to build their own home or become first time homeowners would not be able to do it were it not for the existence of barndominiums. A barndo offers the chance for people to build a home for themselves for a fraction of the cost and at no extra expense to the community.

New home construction also brings money into the community where it is happening. Things like permits, utility work and ecological surveys all cost money and that money goes to the town. To cut off potential new construction by way of a barndominium ban would be like throwing good money away for no reason.

One of the biggest advantages of barndominiums is that they are incredibly eco-friendly. With a double layer of insulation, barndos lose less heat and conditioned air than traditional homes. In a time when green solutions are on everyone’s mind, a barndominium ban is a bad idea.

Barndominiums can also be built to be completely off the grid. With the money people save on their initial construction, they have more cash in the budget for things like solar panels and rain catchers. All of these eco-friendly initiatives would be lost in the event of a barndominium ban.

Barndominiums can be Built With Existing Structures

How many times have you been driving down a highway in your town or community and seen a burned out or dilapidated barn out in the middle of nowhere? If you live in a place that doesn’t have a barndominium ban, that barn could be turned into a beautiful home instead of a rotted out structure that is falling apart.

This falls in line with some of the green initiatives laid out above. Upcycling is a major trend right now and people are able to take things that were once useless and create something beautiful and functional out of it. Nowhere is this more apparent than in barndominiums that have been built from existing structures. A barndominium ban removes these opportunities and those run-down structures are more likely to sit and get worse.

Most Barndominiums are Single-Story

One of the major concerns of a township or heavily zoned community is homes that are more than one story. Many people don’t want to allow two or three story houses in their community because it could ruin their view. Most barndominiums only have one story, or if they have a second one it is in a loft space that doesn’t add any external height. A barndominium ban could increase the possibility of two or three story homes being built in certain communities.

Barndominiums Have a Faster Construction Time

Loud construction that goes on for a long time is never something that people enjoy. The early hours and the noise pollution can be a drain on a community and can really decrease the quality of life in an area. Barndominiums are usually built in less than half the time it takes to build a traditional home. Because of this, their construction takes up less of a neighborhood’s patience and peace and quiet.

A barndominium ban could increase the time of new construction in an area. By allowing barndominiums, a neighborhood could be much quieter and homes could be built in a much shorter time frame.

While the barndominium ban in Arnold, Missouri is an isolated incident, the possibility exists for more communities to adopt these rules and regulations. Hopefully, by pointing out some of the reasons why a barndominium ban is a bad idea, we have explained how allowing barndominium construction in a community could be an incredibly positive thing.

If you would like some more information on barndominiums and how they are built, check out Barndominium Life and take a look at some of the featured barndos. It won’t take long to see why some of these beautiful homes could be an excellent addition to any city or town. 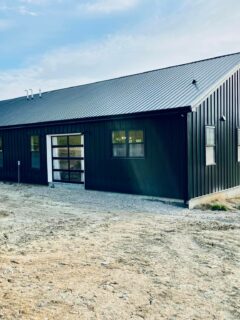