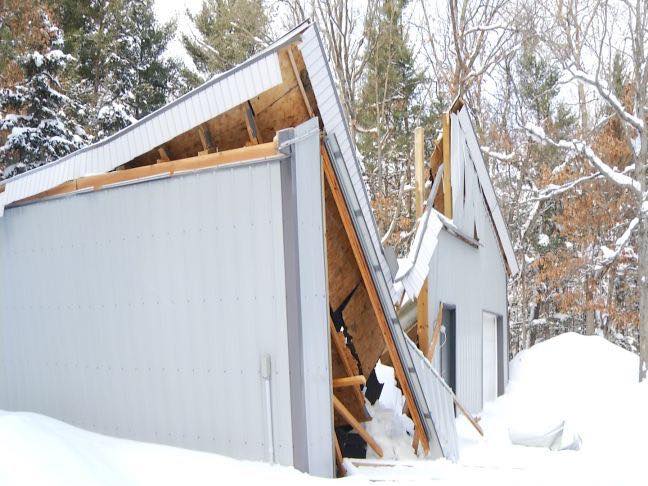 Here’s a thoughtful post from a Facebook member named Kevin Arthur Tiberius. It’s honest, straightforward and helpful. He even includes a photo of a barndo that was designed and built by an inexperienced owner-builder.  There’s not much left after being smashed by a heavy snowfall.

If you’re trying to be an owner-builder on the cheap, read this and take it to heart.

A word of caution

“After spending some time on this page (Barndominium Living Facebook Group), I’ve gained countless ideas and have seen several people do amazing jobs of building their new homes; however, I cringe almost daily in watching some major mistakes that I fear will end in disaster and possibly loss of life.

“I understand that everyone wants to save money. Most of us wouldn’t be here if we didn’t care about building an economic and efficient home. There are countless ways in which you can reach that goal while constructing your barndominuim, but please… I beg you… Don’t skimp on your foundation, structural support, or engineering. You’re building a home, not a tractor shed!

“I’ve literally watched people (here and/or elsewhere) pour concrete foundations with virtually no steel (rebar), use a structural blueprints designed with red iron and substitute the steel with wooden posts, and I’ve even seen people using plywood as structural beams.

“Most of us are not engineers. Many of us who believe we are don’t have the experience and knowledge to understand how much strength is lost in a beam while it’s flexing 2 degrees under the stress of heavy wind, or how much strain is placed on a truss under snow load.

Save a buck, but do so conscientiously

“Yes, you can build your shell at $10 per square foot and use that savings to put in some granite countertops, but will it really matter when the entire building collapses from straight-line winds? A properly designed structure on a proper foundation won’t cost you that much more and can withstand much higher stress.

“As a first responder in a rural area where barndominiums are common, I’ve personally observed more than one collapse due to improper engineering. I’m also aware of one (built as a wooden pole barn home) which collapsed under 70mph winds killing a young child.

“If you’re not an experienced structural engineer, either go with a professionally designed building kit, or hire an engineer to look over your blueprints and provide their expertise.

“Many Blessings, and good luck!”