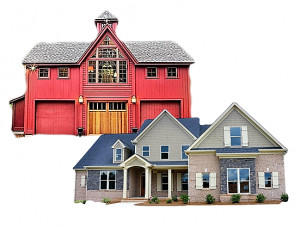 You’re finally ready to build on that parcel of land you bought out in the country. Now, the question is; Do you want to build the barndominium you’ve been dreaming of? Or should you go ahead and build just a conventional house?

Barndominium Cost vs House? What’s the difference? Houses are typically built of wood or brick and have ceiling heights limited to 8-9 feet. Barndominiums on the other hand are typically made of metal and can have incredible vaulted ceiling heights of 14 feet or more. So, they are as different as night and day — on the outside. But on the inside, anything you could imagine doing in a custom home you can do it in a barndo — and make the ceilings as high as you want into the bargain.

There can also be a substantial savings in terms of construction costs, if you manage it carefully. And the energy savings should be substantial as well, as long as you’re willing to pony up front for the right insulation.

So much for the overview. Now, on to the details.

Custom home building has taken a bit of a hit over the last decade as the economy in some parts of the country has wavered. Consequently, there has been an explosion of growth in alternative home options, from tiny homes to prefab houses to — ultimately and happily — barndominiums.

That’s partially due to rising construction costs across the board — for lumber, labor and the land on which new homes are built.

More and more homeowners — and prospective, “first-time” homeowners — are seeking alternatives to traditional housing and are once more gravitating away from crowded city suburbs and back out into the countryside their parents and grandparents came from.

That’s why the prospect of owning a barndominium has become so alluring of late.

What is the definition of a Barndominium? 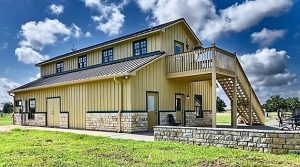 A very basic definition is that a barndominium is, in most cases, a steel building — sometimes quite large — that has room for both living quarters and a shop or garage. In some barndos, the residents even make room for their horses.

Barndos have also, over time, proven themselves to be highly affordable and energy efficient — in addition to being low maintenance.

They also have evolved into sometimes elaborate — and even lavish — dwelling places that incorporate many of the finer features of the most expensive custom homes.

In other words, just because you are, in essence, living in a barn, doesn’t mean you can’t have granite countertops and a professional-grade kitchen.

Really, the sky is the limit — or rather, your budget is the limit — on just how you choose to build out your living quarters — all the way up to four bedrooms and beyond.

A Comparison – Barndominium Cost Vs House 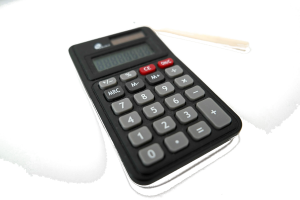 The latest figures for building a conventional home — exclusive of the cost of your sometimes zero lot line land footprint — is around $290,574, or about $145 a square foot for a 2,000 square foot home in a good neighborhood in even a mid-sized city.

A sizeable chunk of that will go into the exterior framing of the walls, including windows and doors, and covered then with brick, stucco or vinyl siding.  And, of course, the addition of a roof.

With a barndominium, however, your costs for erection of the so-called “shell” — the exterior walls and roof  included — will likely be significantly less.

One barndo builder even goes so far as to offer his DIY clients an engineered foundation, unlimited exterior doors and premium windows along with the erection of a metal shell. All for a complete price beginning at only $38,000.

If you’re building the interior out yourself — or subcontracting the work, acting as “owner-builder” — you’ll likely save a lot by utilizing this option. Dozens have done so — utilizing shell-only kits to start with — bringing the final cost in between $70 and $95 a square foot on average

And that $70 a square foot number is for a 5,000 square foot barndominium. More on that story in a moment.

What do you get when you buy a shell — or a barndominium “kit?”

Once again, you’ll find the answer is, “It depends.”

Some metal building companies will just give you a bare bones shell for a bare bones price — as low as $10,000 for a 900 sq ft kit.

In fact, that’s more the norm than the exception, especially for the big national companies. They offload your frame in big pieces from a loaded-down semi. That leaves you to make sure your slab agrees with your kit’s dimensions.

Currently, the market leaders in barndominium kits provide the following features and building elements as part of their packages:

Some barndo builders are making these kinds of “value-add” enhancements to the basic shell — or “kit” — package in order to remain competitive in a fast-changing market.

And the addition of a vital item like premium windows as part of your shell will be one less expense you would otherwise incur in the finish-out of your barn home.

Here are a few of the top national metal barndominium builders. Click on each image to visit their websites for more information. To view a more comprehensive list — including regional builders in Texas –– click here. 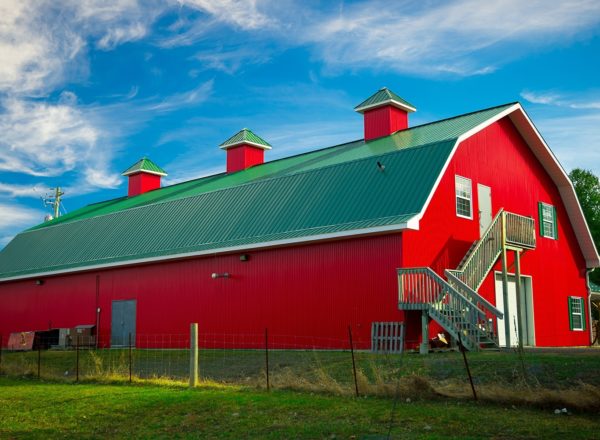 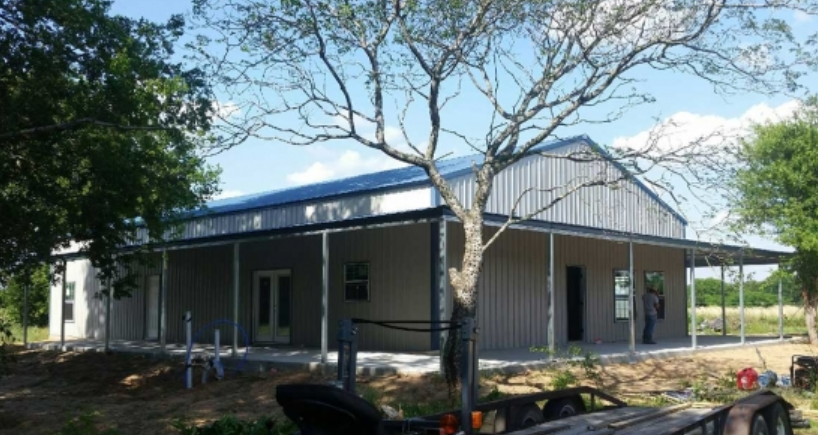 And now a word about wooden barndominiums

There are several companies around the country that will ship a wooden kit to your building site that you can construct yourself. Depending on your skills and expertise, you can do it yourself. Or use hired subcontractors. Or work with a construction manager to put the pieces together and then complete the inside.

Among the best is a company in the Pacific Northwest called Barn Pros. They pre-cut the heavy timber that will make up your future home, based on your adjustments to one of several predetermined kits. Then, they put the materials on a flatbed trailer, and ship the whole thing to your jobsite. There, depending on your comfort level with managing a complicated assembly like this, you will put the pieces together to get a beautiful and highly functional “barn with apartment.”

Here are two of their kits, which range from a low of $68,995 for the 24×36 ft Huntington Barn apartment. to a high of $72,995 for the much larger Equestrian — primarily a stables with space above for a loft apartment or office. 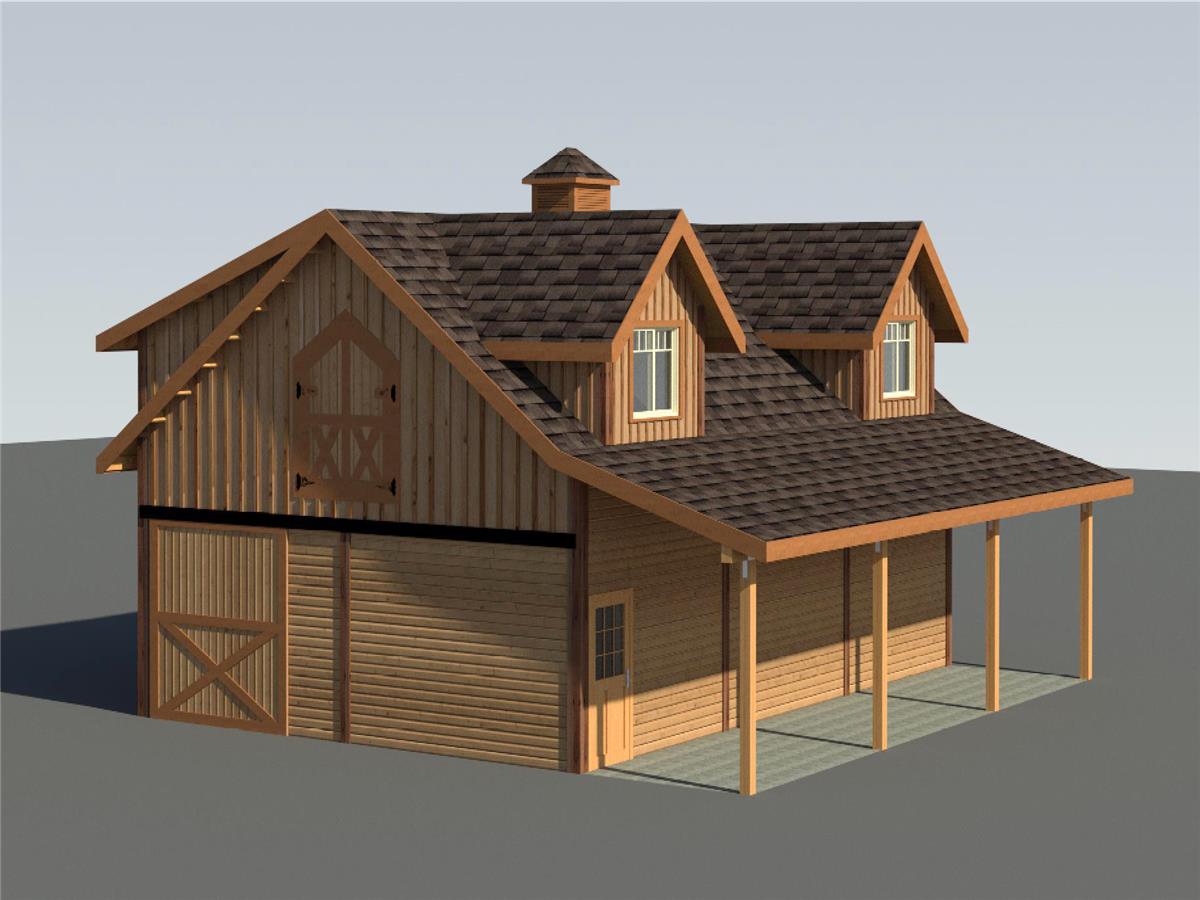 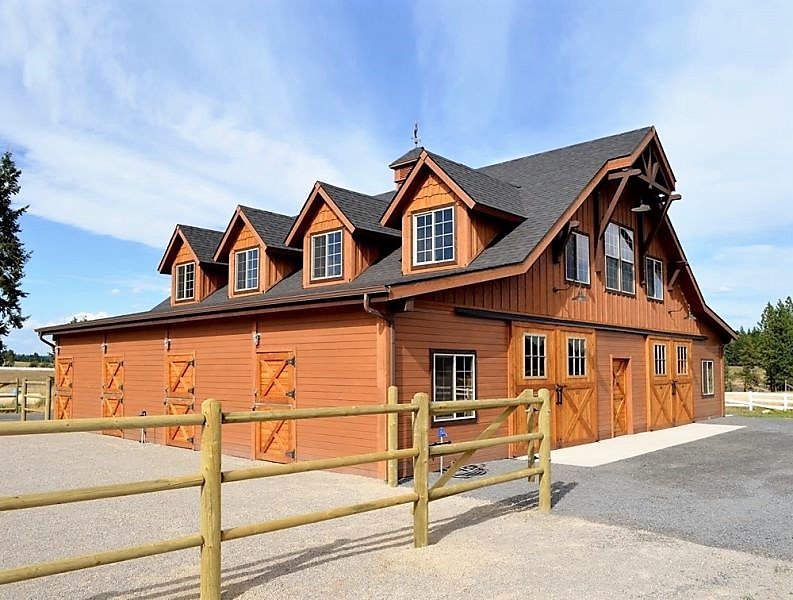 Barn Pros is just one of a few companies that creates this kind of “legacy” structure that will still be standing when your grandchildren have children. Are they cheap to build? Not exactly. The relatively low kit price doesn’t include the engineered foundation upon which it must rest. Nor does it include labor or even nails.

But the reviews on Barn Pros are outstanding, and we can recommend them and a very similar company, also out of the Pacific Northwest, called DC Structures. See their “barns with apartments” here. 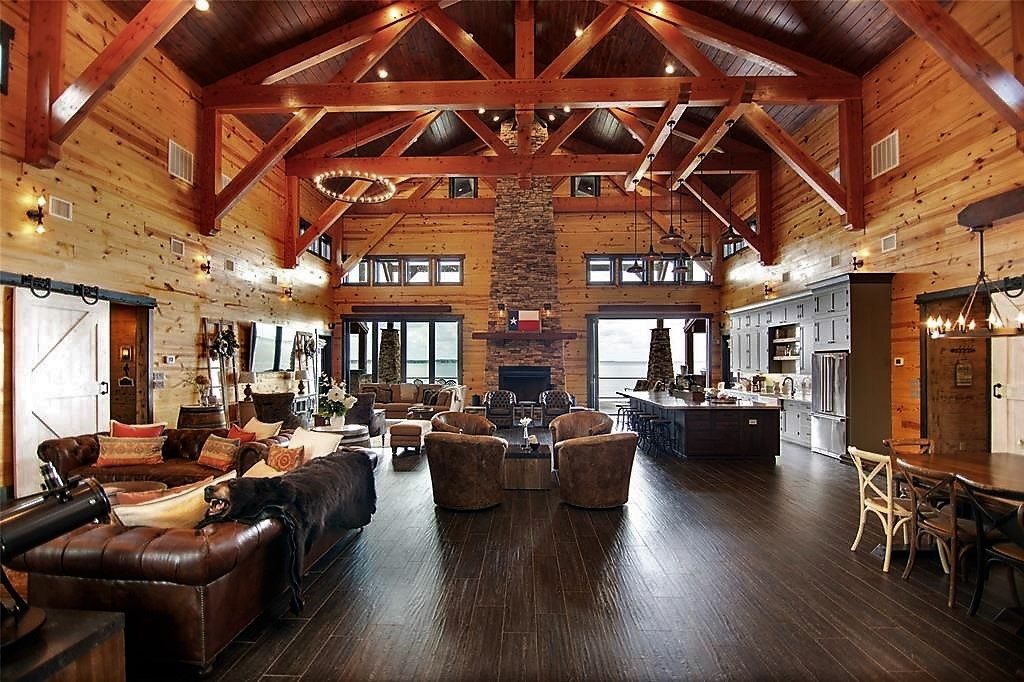 With new home construction again on the way up in urban areas, the fact still remains that first-time homebuyers and those with limited financial means will be shut out. Which leaves them with barndominiums as a logical choice.

They’re less expensive overall to build. Especially if you’re willing to act as owner-builder or at least throw in a fair amount of sweat equity. And they’re unique, allowing folks to have a dream home on the inside of a building that is nothing but steel on the outside.

A spokesman for one steel shell builder for example, asserts that they are seeing their customers move into their largely DIY barndos at anywhere from $60 sq ft up to around $90 sq ft.

“It’s the new home revolution of this century,” he goes on to say. “Barndominium kits offer a very reasonable alternative to custom homes. And that trend will continue for at least 20 more years.” 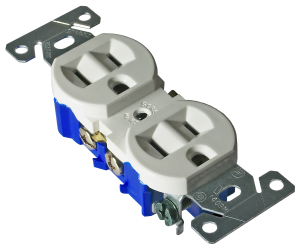 Here’s an excerpt from an article that offers a good explanation on the differences between open and closed cell spray foam.

“Open-cell is also known as half-pound foam. It has an R-Value of 3.5-3.6 per inch, and its density is bout 0.5 pounds per cubic food. Low-density foams like these are made partially from raw biological materials.

“Carbon dioxide or water is also used in the makeup. Open-cell uses far less material than closed-cell, but its R-Value is lower.

“Also, open cell requires a vapor retarder (like gypsum wallboard) and is riskier when used for roof sheathing. It’s not highly recommended that you use open-cell insulation if you live in a cold climate unless you have that extra barrier.

“You should also compare how much money you spend versus how effective the open-cell insulation is wherever it’s installed.”

“Closed-cell (aka two-pound foam) is denser than open-cell at about 2 pounds per cubic foot. Its R-Value is between 6-6.5 per inch.

“As a result, this kind of foam is much more expensive than its counterpart. The reason closed-cell doesn’t need a vapor retarder is because it already has one.

“It’s permeance is 0.8 perm, which means it can handle cold climates without the use of an additional board or drywall. Closed-cell uses hydroflurocarbons (HFCs) as part of its makeup.

“However, this material has been known to have a high global warming effect. If you want a green insulation solution, this is not the material to use. A way to avoid this and still use closed-cell is by installing it alongside fiberglass batts.”

Rounding out this discussion on the energy-saving advantages of a barndominium, is another barndo owner:

“Our electric bill is 30 percent to 50 percent less than a conventional house, and I think that’s a conservative estimate,” says Tim Thomas, who owned a conventional home in Plano, Texas, before moving to land in the country. When he built his barndominium, he left about two feet of space between the metal exterior walls and the interior walls for additional insulation. (Source: Home Sweet Barn)

If you’re not convinced yet that building a barndominium instead of a conventional home is a good idea yet, perhaps you should visit one of these unique dwellings.

There are now literally hundreds of them scattered across the rural counties of Texas. And hundreds more popping up across the country, from North Carolina to Missouri.

And if you should visit, chances are good that you’ll be greeted by the barndo owner on the front porch with a smile and an invitation; “Come on in. We just put some coffee on.’ 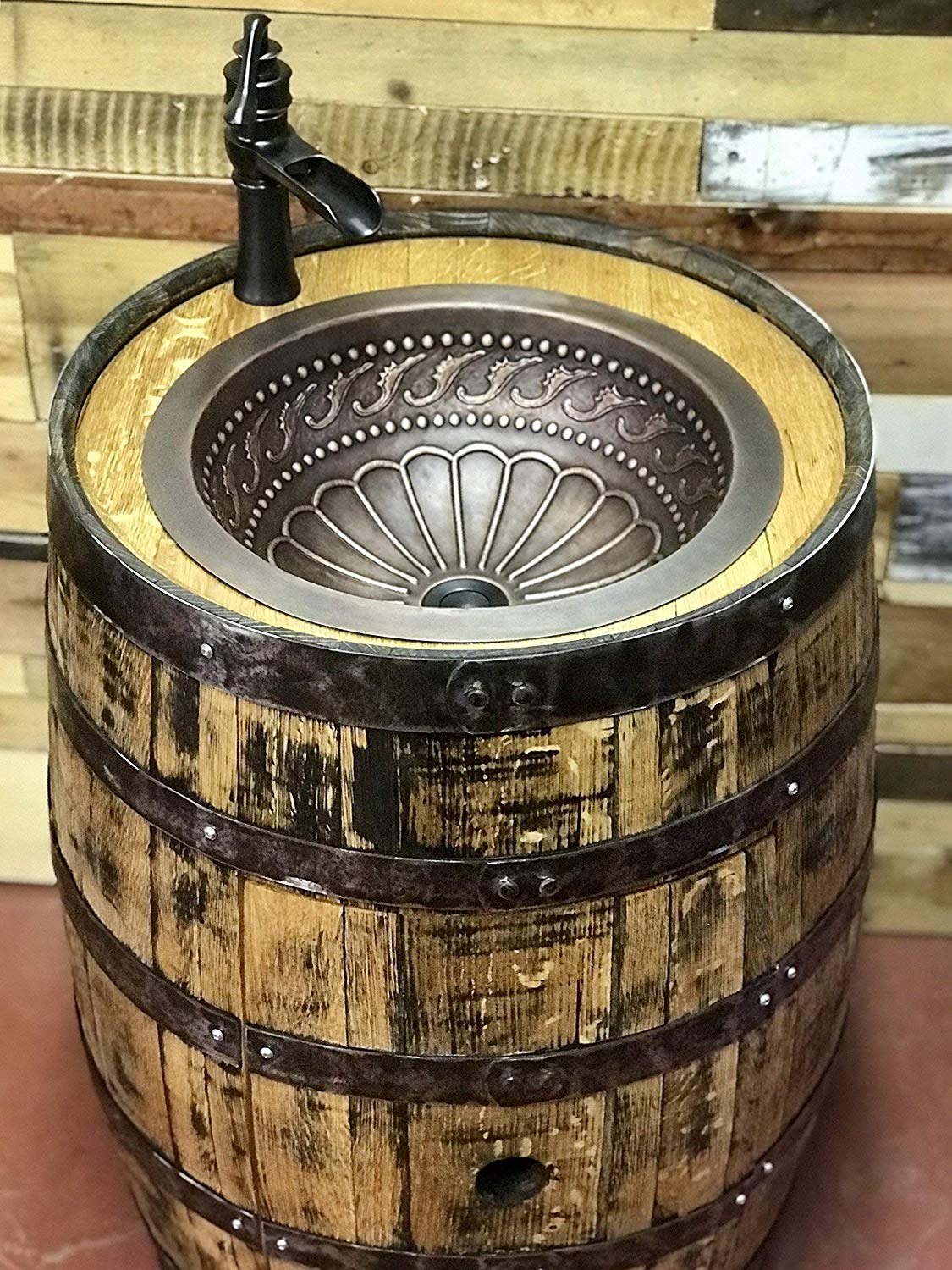 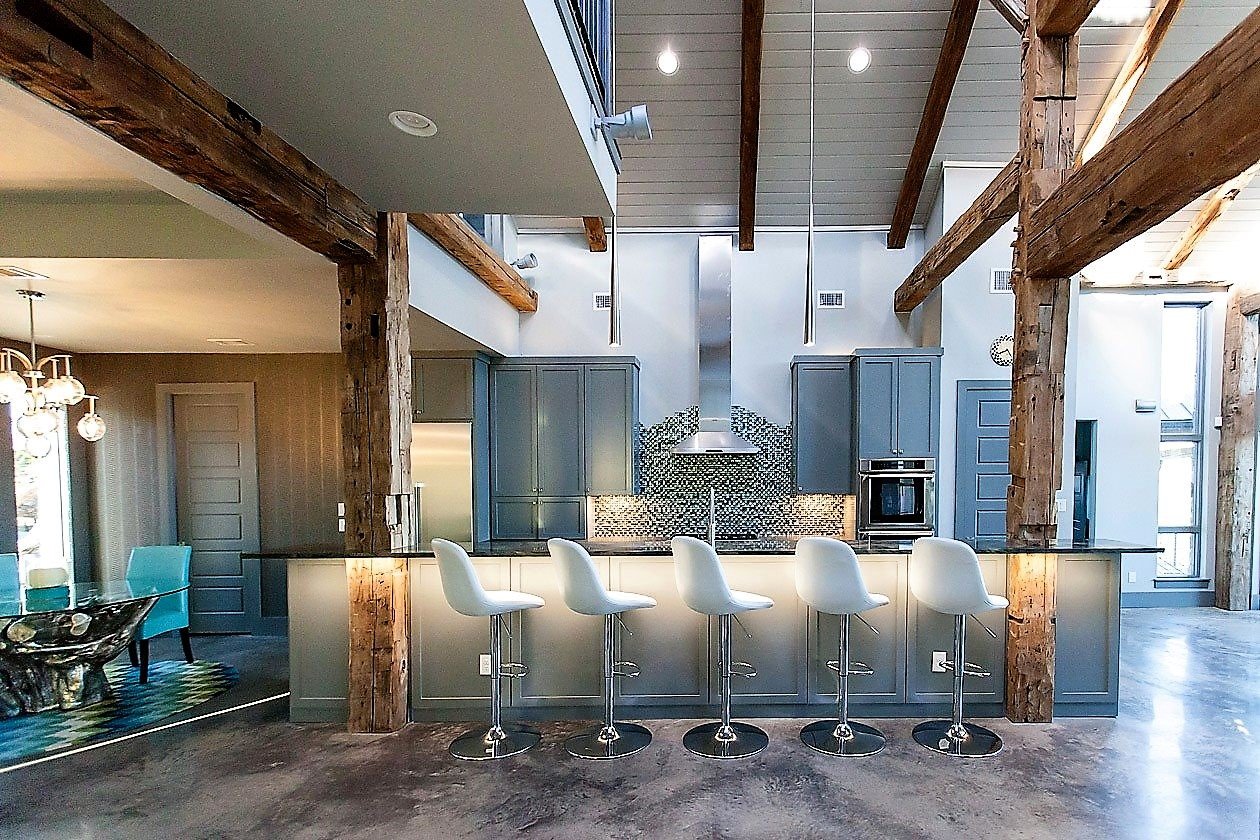 Next
17 Jaw Dropping Barndominium Kitchens That Will Amaze You

Find awesome listings near you!