Where to Start When Building a Barndominium: 7 Easy Guides

Building a new barndominium involves many steps, especially if you decide to act as the owner/builder. When it comes time to build the structure and deciding where to start when building a barndominium, you need to consider the foundation, the frame, roofing, and dozens of other details.

Before you start building, you need to determine your budget and financing. You must also find the right location and blueprints. After you get these details lined up, you can finally break ground on your new home.

So, where do you start?

The following guide covers the typical order of steps involved in building a barndominium.

Overview of the Barndominium Building Process

One of the first considerations when determining where to start when building a barndominium is the amount of work that you want to handle yourself. An owner-builder is someone who acts as the general contractor on their own project.

Unless you have the required licenses, you will need to hire plumbers, electricians, and other subcontractors. However, you still need to understand the building process.

Here is a quick overview of how the process works:

Knowing where to start reduces the risk of costly errors and allows you to coordinate with subcontractors and suppliers. Keep in mind that building regulations vary from one region to the next. Depending on where you plan on building your barndominium, you may need to install a septic system and obtain permits for plumbing and electrical work.

The foundation of your barndominium is arguably the most important feature. It is also the first thing you need to take care of when you think of where to start when building a barndominium.

Pouring the foundation may also include several steps. Some sites require clearing and grading. For example, the terrain may be too hilly.

The site is typically prepared using a backhoe and a bulldozer. The area is cleared of debris, including rocks and trees.

The foundation can be poured once the site is cleared. Barndominiums are often built on slab foundations. A slab foundation is just a slab of concrete. The metal posts of the frame are mounted to the perimeter of the slab.

While most barndominiums are built with slab foundations, you can also have partial basements, walk-out basements, and full basements.

Basement foundations involve more steps, as you need to dig a hole in the ground. A full basement requires the use of anchors to secure the frame posts to the top of the foundation.

Some jurisdictions require an inspector to inspect the foundation before you can continue with the remaining steps. The inspector verifies that the foundation was installed properly and complies with local codes.

After pouring the foundation, you can start erecting the frame. The frame is where you will find the main differences between barndominiums and traditional stud frame homes.

Traditional residential homes use wood stud frames, which feature wood studs spaced about 16 to 24 inches apart. The wider spacing of the post-frame provides greater flexibility for choosing windows and doors.

Along with the outer frame, you must construct the framing for the floorplan. The interior typically features the standard wood stud frame construction used in traditional homes. Always start with the outer walls of the rooms before adding the frames for closets.

After framing the interior of the barndominium, add the exterior walls. The exterior walls typically consist of plywood or oriented strand board (OSB) nailed to the outer frame. Metal siding is then applied over the plywood or OSB.

The roof is added after the frame is erected. You want to ensure that you have a roof over your head before you complete any of the interior work, such as the plumbing and electrical work.

Barndominiums are built in a variety of styles and feature different types of roofs. Some of the most popular barndominium roof options include:

Gable roofs are the most common option. They feature two sides with an equal pitch, creating an “A” shape. A gable roof with a high pitch is preferred in regions with snow and heavy rain, as the slope helps divert rain from the roof.

Shed roofs contain a single plane that slopes from one end to the other. You are more likely to see shed roofs on smaller barndominiums. However, some designs may include a combination of roofs, such as a gable roof over the main part of the structure and smaller shed roofs around the sides.

Gambrel roofs are typically found on barns. They feature two sides with a joint in the middle and are typically much taller compared to other options. A gambrel roof may work better with a two-story barndominium.

Monitor roofs resemble gable roofs with extensions on the sides. A monitor roof works best with two-story barndominiums where the second floor is smaller than the first floor.

The exterior walls may be added after the frame or the roof. Waiting until after the roof is a little more convenient, as the exposed frame offers more convenient access to the upper portions of the structure.

Plumbing and electrical are added after the frame, roof, and exterior walls are completed when working out where to start when building a barndominium. This ensures that the interior features are shielded from rain and the outdoor elements.

Plumbing and electrical are also two areas that typically require licensed professionals. The plumbing is typically handled first. You need to connect the water supply lines for each fixture. The plumbing also needs to connect to the sewer line or septic system.

Large fixtures are typically added at this point as well. For example, you may want to add large bathtubs and kitchen counters now, as you have more room to work with before adding the drywall.

You may need to have a separate subcontractor come in to install the ductwork for the HVAC system. Some regions require a licensed professional for all HVAC work. The HVAC ductwork and vent pipes may also be installed before the electrical wiring, as it is easier to run wires around pipes.

A licensed electrician can run wire for outlets and lights throughout the barndominium. Wiring for cable, telephones and other electronics are also added at this time.

Insulation is added after the plumbing and electrical, as pipes and wires are likely to run through the walls. Barndominium owners have several options for insulation, including:

Batting insulation is the most common type of insulation. It includes rolls of batting that you line between the frame posts. Batting also offers the lowest insulating value.

The insulating property of insulation is listed as its “R” value. Batt insulation has an R-value of 3.1 to 3.4 per square inch.

Drywall is hung after the insulation unless you plan on adding blown-in or spray foam insulation. Blown-in insulation and spray foam are sprayed into the wall cavities through small holes.

Most barndominiums have ½-inch-thick sheets of drywall. The drywall should be hung on the ceiling before the walls, as the drywall on the walls provides additional ceiling support and tighter corners.

The final steps in planning where to start when building a barndominium include dealing with the exterior features, such as the walkways, driveways, and landscaping. You may want to pour concrete for a walkway between the drive and the front door.

You now have a general idea of the typical building process for where to start when building a barndominium. If the variety of steps appears overwhelming, consider working with a builder.

Hiring a contractor or a building company that specializes in barndominium construction may cost a little more. However, you are likely to save time and ensure that you get the job done right. 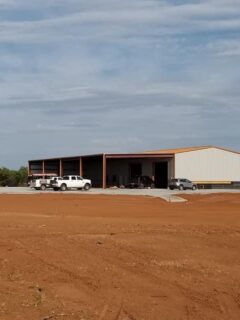