Are Barndominiums Worth It? | 5 Strong Reasons Why They Are

Before building a barndominium, you likely have a long list of questions and concerns, including whether it is worth the effort.

Are Barndominiums Worth It?

Barndominiums tend to save you money. Most barndominiums are also extremely durable. However, deciding to build a barndominium comes with additional considerations and challenges compared to other types of homes.

Examine the following pros and cons of barndominiums to determine if a “barndo” is the right choice for your next home.

Why Should You Consider Building a Barndominium?

Barndominiums are typically metal buildings with steel frames. The homes are built using post-frame construction, which involves placing large posts about 8 to 12 feet apart. A traditional wood home uses a stud frame with wood studs spaced about 16 to 24 inches apart.

The differences in construction lead to many advantages. Here are a few of the reasons why building a barndominium is worth it:

Barndominiums are increasing in popularity and are found in every state. However, the real estate market does not include a lot of existing barndominiums. If you are thinking about buying a barndominium, you are likely going to need to build one from scratch.

To determine whether building a barndominium is worth it, you should explore the advantages in more detail.

Barndominiums Are Often Cheaper to Build

According to HomeAdvisor, the average cost of building a barndominium is $30 to $40 per square foot. Traditional homes cost $100 to $200 per square foot to build. However, the cost varies depending on how much you handle yourself.

For example, if you have experience with construction projects, you may decide to act as the owner-contractor and save money. Hiring a professional builder often costs more but decreases the risk of construction mistakes. Yet, both options are still cheaper compared to building a standard home.

You can also find a wide range of barndominium blueprints online. Instead of hiring an architect, you can shop for premade blueprints that suit your specific needs.

The cheaper cost of construction leads to additional benefits. With lower costs, you may not need to borrow as much from a lender. You may need a smaller down payment and end up with lower mortgage payments compared to building a standard home of the same size.

The lower costs may also allow you to build a bigger home. For example, at $200 per square foot, $200,000 would cover the construction of a 1000 square foot traditional home. At $40 per square foot, you could potentially build a 5000-square-foot barndominium for the same price.

On average, it takes about seven months to build a standard home from start to finish. If you need to hire an architect to draw plans for the house, you may need to add two to three months to the timeframe.

Barndominium construction is often faster, especially when using a barndominium kit. Basic barndominium kits include the steel frame, roof, and exterior walls. You can also find kits with custom fittings and amenities to complete the home.

Without a kit, a barndominium may take five to six months to complete, which is still shorter compared to building a wood home.

Barndominiums are often made with steel frames and metal siding. The metal exterior allows barndominiums to withstand more severe impacts compared to wood homes. A barndominium may even withstand tornadoes, hurricanes, and fires.

Metal homes can withstand winds up to 170 mph. Traditional homes may sustain winds up to 80 mph before the windows shatter and the structure begins to creak.

Barndominiums provide increased versatility, as you can include larger floor plans and add on to your property later. The steel post frames that are often used for barndominiums support the ceiling instead of requiring interior walls to support part of the load.

Without the need for load-bearing walls, you can have a completely open floor. The variety of layouts for the rooms and hallways is limitless. Barndominiums can also include space for work or hobbies. The first barndominiums included living quarters and space to care for horses. Modern barndominiums often include a large workshop that could be used as a garage or a place to work on your hobbies.

What Are the Drawbacks of Building a Barndominium?

While barndominiums cost less to build, finding a lender to finance the construction is not always easy. Many traditional banks and credit unions are more hesitant to approve barndominium construction projects.

Banks may charge a higher interest rate or require a larger down payment, as they have less experience dealing with these types of construction projects. Barndominium builders often rely on rural banks, farm banks, and other institutions that have dealt with barndominium construction in the past.

Do Barndominiums Increase in Value?

To determine whether your barndominium will increase in value, you should consider the appreciation rates of other types of properties.

A barndominium is likely to fall somewhere between commercial real estate and traditional homes. Depending on the demand in your area, a barndominium should at least hold its current value or slightly increase in value.

Are Barndominiums Worth It?

Building a barndominium includes a few challenges. You may not immediately find a lender willing to approve a construction loan. Before starting construction, you may need to shop around and try several lenders.

Depending on the region, you may also struggle to find a contractor or building company that has enough experience with barndominiums. If you have the financing lined up and plan on DIY construction, the drawbacks may not matter to you.

The advantages also tend to outweigh the drawbacks. Building a barndominium is typically cheaper compared to building a standard house. The lower cost of construction may result in a smaller mortgage or allow you to build a larger home than you could typically afford. Along with lower costs, barndominiums provide greater stability and security. Barndominiums are durable structures that may withstand hurricane-strength winds and severe weather.

The bottom line is that barndominiums are worth it, as you are likely to spend less while getting more living space. You get more value for your money. 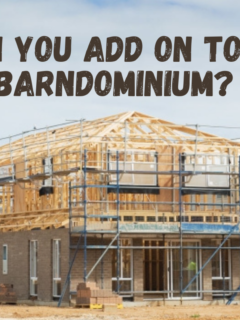 Previous
Can You Add on to a Barndominium? 5 Important Factors to Look Into 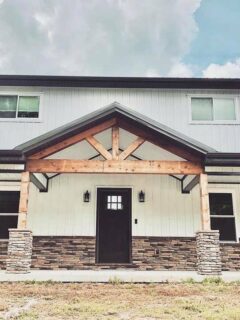 Next
Building a Barndominium in Canada - Your Ultimate Guide